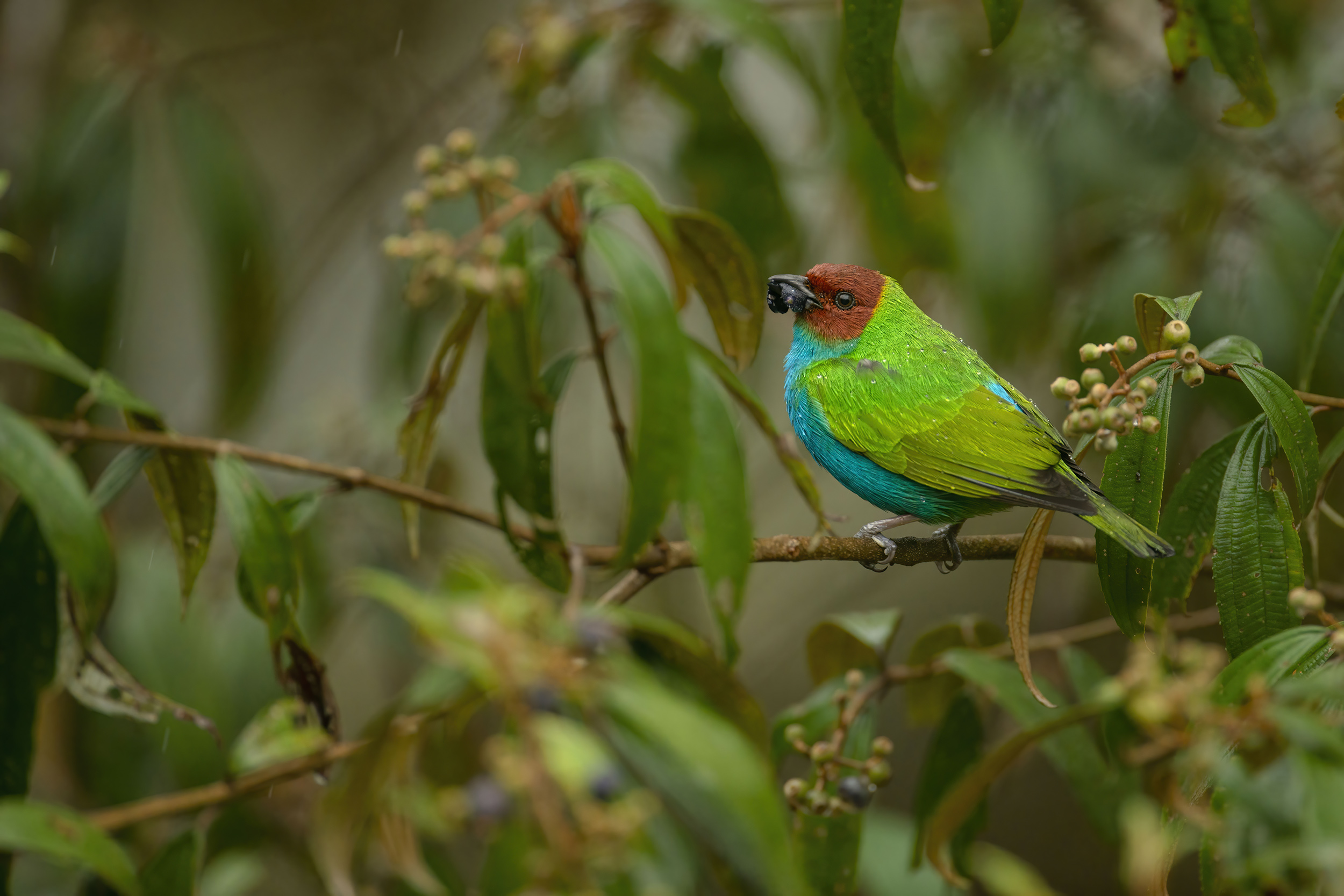 Months to visit: All year. Peaks from January to early May – July second peak

1. Arenal Volcano Area is well known for its active summit, but little is talked about its great bird diversity and its beautiful rainforest. Coming across Quail doves, mix flocks, soaring eagles, elusive antpittas are just another day in paradise. Bordering forest edges by the lake is very successful, the complex vegetation of many different ages makes this piece of Costa Rica a must to visit for birdwatchers. Great Currasows in the middle of the paths, active Black throated Wrens on tangled vines, silently perched raptors on exposed death tree trunks, hyperactive Coquettes going from flower to flower are just part of a daily birding.

Day 1. Arenal Observatory Lodge. Upon arrival we are going to explore the hotel grounds, for a good number of honeycreepers, tanagers, oropendolas, some hummingbirds and many other forest birds such as trogons, pygmy tyrants on the hotel private preserve. The remaining part of the afternoon we will take a drive to the Arenal Lake area in hopes to find guans, parrots, motmots, toucans, etc. All meals included.

Day 2. Arenal Observatory Lodge. Birding all day at the hotel grounds. Exploring its private 600 hectares of primary, secondary forests with unlimited possibilities and good chance for Bare necked Umbrellabird. The hotel is in front of the most active volcano in Central America; its views are majestic and unrivaled. Upon request a visit to Baldi Hot Springs (non included)

2. Sarapiqui is a real rainforest experience with vast areas to cover, primary rainforest, active and no active pasture fields, river edges, canopy bridges, thick understory, etc. Cotingas, macaws, oropendolas, guans, eagles, toucans are some of the many species to find. At Gavilan Lodge daily birds to spot are Green Ibis, Sunbittern, Jacamars, Tanagers, Orioles, Woodpeckers, Tityras, etc. Botanical gardens nearby offer great opportunities to spot a dozen or more species of hummingbirds and its adjacent forest always bring good surprises as Little Tinamou, Lattice tailed Trogon, Cinnamon Woodpecker, and much more. The Braulio Carrillo National Park is a real rainforest experience with the largest mixed flocks ever including favorites such as Sharpbills and Umbrellabirds.

Day 1. La Selva Biological Station. Traveling to the Braulio Carrillo is breathtaking, its 95% of the forests has never been altered by human hands, dozens of small waterfalls, evergreen vegetation makes this little piece of jungle one of the best places in Costa Rica to visit. More than 350 species had even recorded within the park area & adjacent villages. Our first visit is to a local’s farm in search of Spectacle Owl, Long tailed Tyrant, Great Potoo, White throated Crake and the least goes on!! Lunch at a nearby restaurant and visit the national park to try to find Sharpbill, aracaries, mix flocks of tanagers, orioles, woodpeckers, barbets, woodquails, rare wrens, etc. All meals included.

Day 2. La Selva Biological Station. Birding all day at the lodge grounds. At the lodge, the nearby riparian forests hold a good biodiversity of birds, such as Sunbittern, Green Ibis, Bright rumped Atila, Fasciated Antshrike, Rufous tailed Jacamar to mention a few. We will also visit a couple local spots for guans, toucans and more.

3.Carara National Park is by far one the best birding places all year round in Costa Rica and perhaps in all of Central America. Within the national park protects the second largest population of Scarlet Macaws, easy access to all trails, mangrove swamps, pasture fields and forest edges. There are very few places in the country where more than hundred species can be found in one trail. Meandrica’s trail it has become an icon for quality birding, tinamous, trogons, wrens, antpittas, manakins, cotingas, bellbirds, antshrikes are among the most common birds in the forest. The nearby forested edges give as a good number of open field birds, jays, blackbirds, greenlets, rails, ground doves, motmots, hawks, parakeets, owls are among many of the avifauna found in these habitats. The mangroves at Rio Grande de Tarcoles are very rewarding on a good day along the river edges 5 species of kingfishers can be spotted, more than a couple dozens of shorebirds, herons, egrets are also easy to find but the most remarkable species are the ones with a restricted range or to the mangroves such as vireos, warblers, cuckoos, flycatchers, the elusive Rufous necked woodrail and the only true Costa Rican endemic Mangrove Hummingbird.

Day 1. Cerro Lodge. No meals included. Pick up transfer and information meetings. Today, CRBJ staff will describe the day by day activities, the destinations, possible bird sightings, what to wear by destination and all other general information regarding the trip.

Day 3. Cerro Lodge. Breakfast on the go! “The early bird catches the worm”, today we will visit one of the best birding sites in Central America, Carara National Park is a combination of ecosystems, that aloud an amazing number of endemics, birds with restricted ranges and many other beauties with more than 400 species recorded antbirds, macaws, hummingbirds, euphonias, tanagers, flycatchers, cotingas, wrens, manakins and dozen more families are daily sightings. All day at the park, lunch at a local restaurant & dinner at Jaco Beach town.

Day 14: Departure day. Transfer to the airport based on your flight itinerary. (3 hrs prior taken off)