Balsa trees grow naturally in the humid rain forests of Central and South America. Its natural range extends south from Guatemala, through Central America, to the north and west coast of South America as far as Bolivia. However, the small country of Ecuador on the western coast of South America, is the primary source of model aircraft grade Balsa in the world. Balsa tree needs a warm climate with plenty of rainfall and good drainage Reason why is normally very often found on mountain ridges in Costa Rica but present on the high ground between tropical rivers. Costa Rica has the ideal geography and climate for growing balsa trees as well the rest of Central & some parts of South America. Balsa wood’s scientific name is Ochroma lagopus. The word balsa itself is Spanish meaning raft, in reference to its excellent floatation qualities, but also well used on surfboards, and luxury boats. 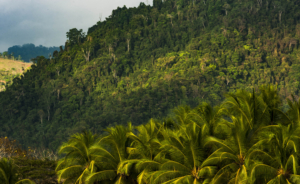 Despite its only popularity as a usable tree for humans, Ochroma lagopus is a fantastic species for bird observation and its photography. Flowering this 2020-2021 at the end of December beginning of January, nonetheless we had observed flowers in previous years on different months such as March and July.

48 species of birds have been recorded since January 1st 2021; some have been seen only a few times on the studied trees at the hilltops of Hermosa Beach near Jaco and Bijagual rainforest behind Carara National Park.

Two separated cases on flower visitation. Lowlands or near the coastline and at 530 meters above sea level. Those at lower elevations have been more frequently visited by migratory birds such as warblers, tanagers, orioles. No species recorded at night time. At the foothills of both observed locations a higher percentage of flower visitation resident species are the most common and nearly permanent comers. To mention a few of them are greenlets, tanagers, flycatchers, parakeets, parrots, oropendolas, honeycreepers, woodpeckers, macaws, cotingas, etc.

What birds get from Balsa Trees? 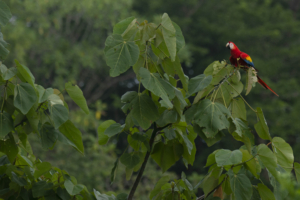 Balsa Tree flowers carry lots of sugars for honey gatherers but also offer insects which visit their cup shaped blossoms. We have also observed birds bathing on them as in the case of Blue Dacnis and Baltimore Oriole’s. Scarlet Macaws can also eat the petals. During the night the levels of nectar goes down almost 13% on a regular fully developed and healthy tree it can be a total of over 700 calories. Several species of mammals such as Woolly Opossum and Kinkajou are predators.

According to conducted research done in Panama the highest peak of their flowers is the second week of January and progressively declines until the highest peak of the dry season in March. Very few trees offer such an incredible opportunity to study bird behaviour due the fact that they are nearly everywhere in the Central Pacific, but equally important to those seeking for great footage or astonishing photography with the easiness of a Zoo in the comfort of your car or a portable chair. 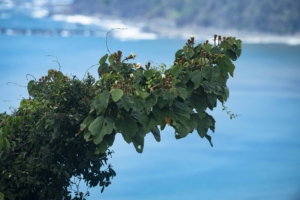